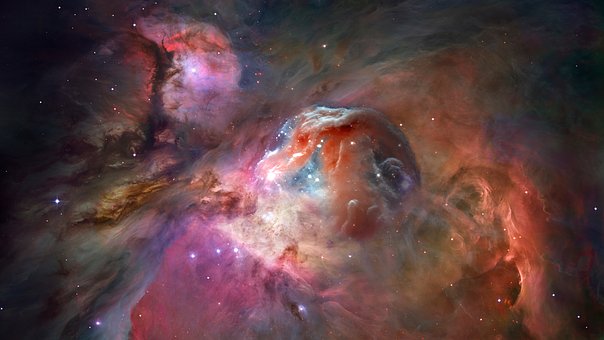 Loosing and Finding Creation in the Christian Tradition.

In the beginning, we know now about 14 billion years ago, God created heaven and Earth, we read in the Genesis story. All that is, all that we as humanity have achieved and have caused comes from that very Beginning. The moment that Gods Dream began to enfold. And as modern sciences have revealed ( esp. in last century, since Einstein and so many others) a continuing process. We have only seen and understood so much. Billions of years passed since that very moment and some four billion years ago the Earth was formed. But as the Genesis Story says, the Earth was still empty, barren, wild, inhabitable.

In a process of more than four billion years everything that we know, has come into existence. Gradually the Earth governed by Gods creative power during all those eons of time developed the processes that prepared the Earth for the appearance of the human. Finally, the human this very vulnerable species, could come and find a beautiful and splen­did home. The Bible describes this Earth as a Paradise, the garden, where God walks with the first humans and gives them the “use” and governance about all that He created.

It is in this garden, that the humans have to find out, how to live in harmony with all the thousands of other-kind, the other creatures that like the humans bear Gods imprint. Only forty thousand years ago, in pre-human forms of life, consciousness developed to such an extent that history of humanity, as we know it, could start.

AII the processes of the Earth, which for billions of years functioned in autonomous ways, now gradually were under the scrutiny of human consciousness and at the mercy of the ways humankind decided to inhabit the “garden”.

From research we know that our ancient ancestors seem to be for the greater part creatures who lived in relative peace and harmony with one another, with other life forms and with Planet Earth. The ancient “wisdom” traditions as they are called. The ways our ancestors lived in harmony with creation, have been a guide for the people, up to today. Humans know, deep down, what an ecological way of living is.

How can it than be, that in the past century alone hundred million people have perished in warfare? An estimated one billion people has died from starvation and malnutrition. As many again have been subjected to torture and incarceration, only in the past decades. And look at what our generation has done to the Earth: the animals, the fishes, the soil, the dumping of all the waste in air, waters, soil and the cutting of most of the forests and depletion of other non-renewable resources. AII what we have done, especially our generation, in the name of economic growth, development and wealth. How come we humans have turned into one of the most barbaric life forms on Earth, bringing forth a world saturated in violence?

When we look at history of human presence on Earth, we see a drastic change with the Agricultural Revolution, some ten thousand years ago. The beginning of the population growth on Earth, because now more people could survive because of more food, changed all. Now the competition for the acquisition and the use of the land began. This also resulted in the first wars.

When we look at the history, we see cultures emerge and disappear again, when the land is no longer fertile and turned into a desert. We are not used to look at everything that happened to the human family from the view point of connection of humans and soil,- air, water etc.

In the great religions we find this deep connection of humans and the Cosmos. When looking at our Christian heritage we see that up to the 16th century the reflection about Earth / Cosmos is an integral part of the Christian life.

In the Bible and the Judeo/Christian tradition we see how God made a covenant with the human God created, and with and in the whole of creation. Gods Shalom encompasses the whole Earth Community. Through the mystery of Incarnation God enters the World and because of that all is sacred . It is St. Augustine who speaks about the two books of revelation. Creation is the First Revelation of God and we need to read the book of creation as much as we read the Bible.

In her summa of Christian doctrine, Scivias, Hildegard of Bingen sees the whole universe imbued with the love of Christ, the sun of justice, who shines with the brilliance of burning charity of such great glory that every creature is illumed by the brightness of this light. In the midst of this marvelous vision stand human beings, “made in a wondrous great glory from the dust of the earth and so intertwined with the strengths of the rest of creation that we can never be separated from this.”

It is in the time of the Reformation that many things begin to change. Through the discoveries of Galileo and Newton a whole new materialistic philosophy develops. This has also a very deep influence on the way we Christians have from there on seen our place in the whole Creation. We have been taken up in a materialistic worldview and have lost the integral vision of the relationship of God and creation and the place of the human in all of this. A mechanistic view of Cosmos, Earth, Earth processes has been the drive behind the ideals of development and progress and the idealization of the industrialization and technological development.

We are living in a world, that being what she is now has been driven in this direction of development, starting about three hundred years ago.Only when we see this, we will come to understand why we have arrived at a situation of the Earth, nature, and the whole community of life, as we find it now. Then we perceive that the crisis of all life on Earth is not a crisis of the environment alone. It is a process of gradual destruction and diminishment of all life on Earth. It is a spiritual crisis, a crisis of values, a growing darkness in the human soul on what it means to be human, to live a good life, to inhabit the God given garden in a responsible  way.

Speaking about Ecology, Ecological Spirituality in the context of our world of today requires that we take a far look and take up the challenge that Jesus poses before us, in his gospel. ” To read the signs of the times”. When you see a cloud appearing at the sky ….. What clouds do we see at this moment, in our own areas? What is happening to the people, to the human soul, to the Christian community? Not alone looking at  it from an anthropocentric viewpoint.  Not only a questioning and examination of where and how human morals fail.

“In the past five centuries the Western soul established its radical alienation from the naturaI  world. Instead of a delight in the natural world and an experience of the Divine in the beauty, wonder and awesome qualities of the world about us, there developed a psychic-spiritual withdrawal from intimate relations with the natural world.

In the sixteenth and seventeenth century this religious alienation from Gods creation left the scene open for the scientific perception of the world as mechanistic and a subject to whatever technological controls humans could invent to make the natural world increasingly useful to the human. Science and technology could take over and exploited the planet because religious persons had abandoned and   “ Ieft the world”.

A next moment of our loss of intimacy with Creation occurred when we left the ever­ renewing organic agricultural economy (a process that is still taking place worldwide) in favor of an industrial non-renewing extractive and exploiting economy; an ever faster dance now of taking from the Earth, making so many products to keep the economy growing and producing the waste the Earth cannot deal with.

Here creation has lost its wonder and majesty, its grace and beauty, its live-giving qualities. Creation, God’s gift to us, has become an object of use. The profound spiritual aspect of the Earth has become almost completely negated. The radiant presence of God is no longer recognized. Creation has become a commodity to be bought and sold, not a planet where humans find both spiritual and physical nourishment.

Christianity and the Ecological Crisis: ” Where are we”?