As developed in Genesis farm, USA

A Celebration of the New Story

This ritual was designed to provide some sense of the awesomeness of the time / space of the universe. You can change and adapt it as you see it. It conveys a sense of sequence in the Earth’s unfolding process. It also dramatically conveys the brief history of humanity, as well as the uniqueness of each person’s life.

The events that have been chosen for this are arbitrary. We recommend that you look over the “time-line” in the Universe Story by Br. Swimme and Th. Berry. There may be other events that you would wish to highlight. It is very important to “know” the audience. Be inclusive of the events which shaped their continent and bio-regions as well as the cultural, ethnic and religious story.

Most of the events happen at the very end and can’t fit on the robe. Group them as close as possible.

Narrator at the beginning of the ceremony*

Now we enter into an enormous experience of space and time of the Universe. We celebrate the mystery of how all life came to be, how the Cosmos was created. We celebrate the story of all the humans that ever were, are and will be. We celebrate all the days of creation and how we have appeared at a certain time.

In the Beginning was the Dream The Dream was with God

The Dream was God

The Dream was with God in the beginning. Through the Dream all came into being

And nothing was created outside the Dream. Out of the Dream God created Light.

Now the candle is lit in the center.

The Universe Story, continuation of the text. 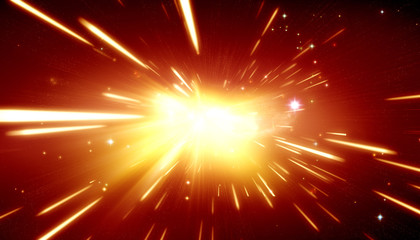 21. 100.000 years ago: humans developed their first rituals and began to bury their dead. Humans began to express their wonder about the Earth in the first cave paintings.

24. 2500 years ago: universal religions emerged, like Buddhism, Christianity. Indigenous people were overwhelmed by these strong movements. Ethical and moral consciousness arose through the works of Buddha, Confucius and other sacred Scripture writers.

26.More than 2000 years ago: Jesus of Nazareth is born and lived among us.

27. 400 years ago: the modern European Scientific Age begins. Europeans colonized peoples all around the planet and destroyed indigenous cultures. The nation state was developed which was later overruled by the multinational corporations. The worldview of this period has brought us in the present global ecological crisis.

28. 100 years ago: the entire modern scientific enterprise, esp. through A. Einstein, has brought forth a radical new understanding of the Universe. The cosmos is a developing and expanding process, a community with the human who has a role and a place in the midst of it. The future of the Earth community rests in a significant way on the role of the human.

29. We connect ourselves to the dynamic process of the story of all life. Card with name, date of birth and eventually a word, sentence is put on the line. Each participant in the circle partakes in it.

30. NOW: all humans can know their common origin story as the story of the entire Earth community in a single sacred Universe.