We need to move from our human –  centered to an Earth – centered norm of reality and value. Only in this way we can fulfil our human role within the functioning of the planet we live on. The Universe, the Earth, the Human are centered in one another. (GW, chapter 6, page

Human society in its beginnings would not have survived if it had not had some basic role to fulfil within the larger Earth community… Once we recognize that a change from a human-centered to an Earth- centered norm of reality and value is needed, we might ask how this is to be achieved and how it would function. We might begin by recognizing that the life community, the community of all living species, including the human, is the greater reality and the greater value.

The primary concern of the human community must be the preservation and enhancement of this comprehensive community, even for the sake of its own survival. (GW, chapter 6, page 56-57)

…Ultimately humans find their own being within this community context. To consider that one is enhanced by diminishing the other is an illusion. Indeed, it is the great illusion of the of the present industrial age, which seeks to advance the human well-being by plundering the planet in its geological and biological structure of functioning…… The planet that ruled itself directly over these past millennia is now determining its future largely through human decision. Such is the responsibility assumed by the human community once we ventured onto the path of empirical sciences and their associated technologies. In this process, whatever the benefits, we endangered ourselves and every living being on the planet. (GW, chapter 6, page 58)

The term “profit” needs to be rectified. “Profit” according to what norms and for whom? The profit of the corporation is the deficit for the Earth. The profit of the industrial enterprise, whatever the advantages, can also be considered as a deficit in the quality of life…(GW, chapter 6, page 63) 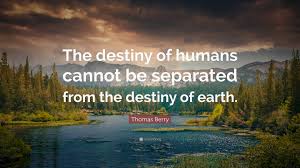