In these opening years of the twenty-first century, as the human community experiences a rather difficult situation in its relation to the natural world, we might reflect that a fourfold wisdom is available to guide us into the future: the wisdom of indigenous peoples, the wisdom of women, the wisdom of the classical traditions and the wisdom of science. …(GW, chapter 16, page 176)

Indigenous Wisdom is distinguished by its intimacy with and participation in the functioning of the natural world…As the years pass it becomes ever more clear that dialogue with native peoples here and throughout the world is urgently needed to provide the human community with models of a more integrated human presence on the earth.” (GW, chapter 16, page 177)

“The wisdom of women is to join the knowing of the body to that of mind, to join soul to spirit, intuition to reasoning, feeling consciousness to intellectual analysis, intimacy to detachment, subjective presence to objective distance. When these functions become separated in carrying out the human projects then the way into the future is to bring them together….developing both a sociology and a cosmology of women.” (GW, chapter 16, page 180)

“The wisdom of the classical tradition is based on revelatory experiences of the    spiritual realm both transcendent to and imminent in the visible world about us and in the capacity of humans to participate in that world to achieve the fullness of their own mode of being.”(GW,chapter 16, page 185)

“The wisdom of science lies in its discovery that the universe has come into being by a sequence of evolutionary transformations over an immense period of time. Through these transformation episodes the universe has passed from a lesser to a greater complexity in structure and from a lesser to a greater mode of consciousness. We might say that the universe, in the phenomenal order, is self-emergent,self-sustaining, and self-fulfilling. Awareness that the universe is more cosmogenesis than cosmos might be the greatest change in human consciousness that has taken place since the awakening of the human mind in the Paleolithic Period.”

It becomes increasingly evident that in our present situation no one of these traditions is sufficient. We need all the traditions. Each has its own distinctive achievements, limitations, distortions, its own special contribution toward an integral wisdom tradition that seems to be taking shape in the emerging twenty-first century. 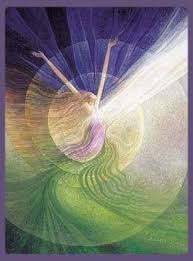