Recently I had the opportunity to visit Transylvania, a part of the S.E. European country Rumania. In Tilburg I met Borbola Szabo, a Rumanian woman, who had to leave her country in the nineties of last century, and has live in The Netherlands till 2015. In her country she lives in a small farm. She shared with me and others her dream of starting an Ecological Learning Centre there. Together with her and several others we looked into possibilities for such a centre.

Touched by her dream and with hope that such a centre can be founded there, in July 2012 I travelled to Praid, a small town in the heart of Transylvania. A place with high mountains, plains and large woods with wild animals. And also a beautiful culture and old traditions of a people who live in a very sustainable way, very connected with the Earth. I found it a pity that I could not communicate with them, because of the two foreign languages for me: Hungarian and Rumanian. Transylvania is an area inhabited by people of Hungarian origin. After World War One  this area is part of Rumania.

Trans-sylvania: the land “between the woods”.  High mountains embrace the land from all sides. Old forests, castles, rivers and lakes and the small farmers villages all over where people live a simple life, like long time ago. A country with a long history of cultures. You find there the Sun temples of Romans, the art of the old great Otto-German empire and the many traditions and festivals that are still alive. The connectedness with land and seasons are expressed and celebrated and also the great moments of life. A very religious people as can be seen in the many cloisters and convents, churches of different denominations and the crosses along the roads.

I was deeply touched by the way the people live. The country is still very agrarian. Farm yards full with fruit trees, corn, vegetables and herbs. It was time for harvest and preservation of the many fruits of the gardens, kept for the long winters with lots of snow and cold. People live very closely with the seasons, as can be seen in the ways of housing: a little house for the family in the summer, when they live mostly outdoors and in the fields, a big house for the long winters with a stove and several rooms for weaving and other handicrafts for gathering to tell the many old stories, and a stable for the hay and the cattle.

A local sustainable economy. Besides the work on the farm the people help each other; one is baking the bread for the village, others earn some extra money with repairing cars or building houses etc. or producing beautiful pottery and other handicrafts and many other ways.  The local community takes care of the commons, meadows for the cattle that are cared for together. In the bigger cities modernity has come to some extend. 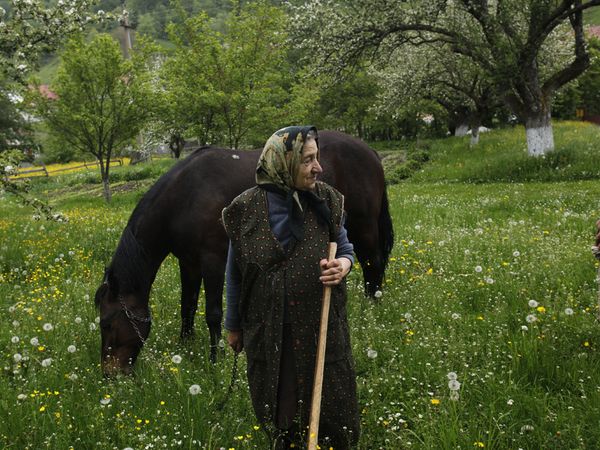 I was struck by the effects of climate change and global warming. Five hundred meters up in the mountains every day the temparature was about 30 degrees C. For two summers now the rains had not come and there was an alarming lack of water. On the mountains the fir trees were dying and the other trees were dropping their leaves already. In the train from Boedapest to Rumania, I saw the dried up corn and wondered if there be any harvest in autumn. I sensed the anxiety in the hearts of the farmers as the wells run dry. Cattle is also thristy!

I felt the power of the healing Earth energy: the saltmine in the little city of Praid. Five hundred meters under the surface people sit for hours in the cool air and breathe in the salty air to cleanse their bronchial tubes. And the pools with hot saline mud, in the countryside. You cover yourself all over with the mud and then let it dry in the sun till you sparkle as an ornament in a Christmas tree. Then to dive in the cool river and be cleansed and relax. Or swimming in one of the many lakes with salt water. I saw the tradition of healing herbs: making teas and ointments from  them.

We saw the old cities with the fortified churches, houses, squares. I sensed how it is to be in the heart of ancient Europe and how properous these areas must have been. I saw the gypsies, of several kinds. They live peacefully amidst the local people there.

In this time of worldwide ecological crisis it is important and very necessary that people of our time rediscover how they can inhabit the Earth in ways that do not destroy or deplete the Earth. Finding and embracing new ways to live  in harmony with the whole community of life. To help the Earth to continue in her basic functions to provide food, healing, wisdom, balance,  fulfillment, governance.

This understanding and knowledge has disappeared in so many places and groups, especially among the younger generations all over the globe. Economic growth at all price and technology of computers and other kind,  ask for all the attention of the modern human and Earthwisdom disappears. The villagers are still very much in touch with the Earth and nature. But also here modernity will come along some day. What a gift will it be to the Earth there and to the people, if they could skip the times of the economic growth imperative I thought. A transition from their present situation into a sustainable way of life of our times. These people could offer  the example and experience of a simple and harmonious lifestyle and share their age old wisdom.

That is part of the vision of the Ecological Learning centre to be. To support and rejuvenate the present villages there and invite the people to share their wisdom and knowledge with many “modern people”. Permaculture, community building, safeguarding culture and traditions. We saw so many possibilities when we gathered in a circle to “dream”  this place. Most of all to build a strong community of local people and people from other places in the world, who can develop and carry all this.

On website www.yogibori.ro and http://firtosh.wordpress.com ( still under construction) you can find more information about these developments.

Bori in the entrance of her yard in Ocna de Sus ( area of Praid) foto C.de Bruijn

Who knows are you touched too, because volunteers are welcome with their expertise and right motivations. Finances are still a bottleneck. Where to find the money to rebuild the stable and make it into a holistic centre for courses? Still there are many possibilities and what is there already is the farm on the yard.

The Earth is dreaming in this place and if people will pick up her dream, it will happen, I am convinced of this. I have seen it happen before and in many more places all over the world.

Western Europe with the many problems about financial crisis, corruption, banks falling down, etc was far behind me and I realized that this land and these people is also the European continent. They are our brothers and sisters, hoping for a sustainable life in the future, not necessary riches but enough to have a “good” life. A life in balance and in connection with the land and nature and .

Shambala Yard, Ocna de Sus: will it happen? It has started already.